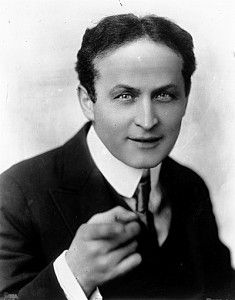 Yeah, posterity is not fair, but maybe we should not pass up the chance to comment a few things about the guy like, although he was a great escapist and the best showman, he was actually a very mediocre illusionist. That he chose his stage surname because of his admired Robert Houdin (already passed away by then), who is one of the most relevant figures of Magic of all time. And that later the guy tried to undermine his legend by writing “The Unmasking of Robert-Houdin” and at some extent he accomplished it. That also that guy chose his stage name because of Harry Kellar, another legendary magician quite popular back then. That, in spite of his lack of knowledge, the guy proudly claimed that no magician could fool him, and of course they did; the most famous was Dai Vernon, “The Professor”, who fooled the heck out of him (not for nothing Dai Vernon is also one of the most relevant figures in Magic of all times). That now days we magicians we keep performing, studying, and developing routines, ideas and philosophies from magicians like Robert Houdin, Johann Nepomuk Hofzinser, Buatier deKolta, Horace Goldin, John Neville Maskelyne, T. Nelson Downs, Al Baker, Dai Vernon, Alex Elmsley, Winston Freer, Slydini… much much much more that this guy’s.