Today I found out that the legendary magician Francis Carlyle, the creator among other things of “The Homing card”, one of the most performed routines ever either by amateurs and professionals, ended his days living in the streets of LA and died of alcoholism in 1975. Another legendary magician, Ricky Jay, found him living in the streets, took care of him and tried to help but it was already too late. He was found unconscious in a street of Hollywood and died shortly after. He was sixty-three. The creator of the Homing card died as a homeless. What a sad punch line. 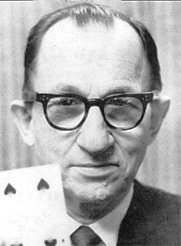